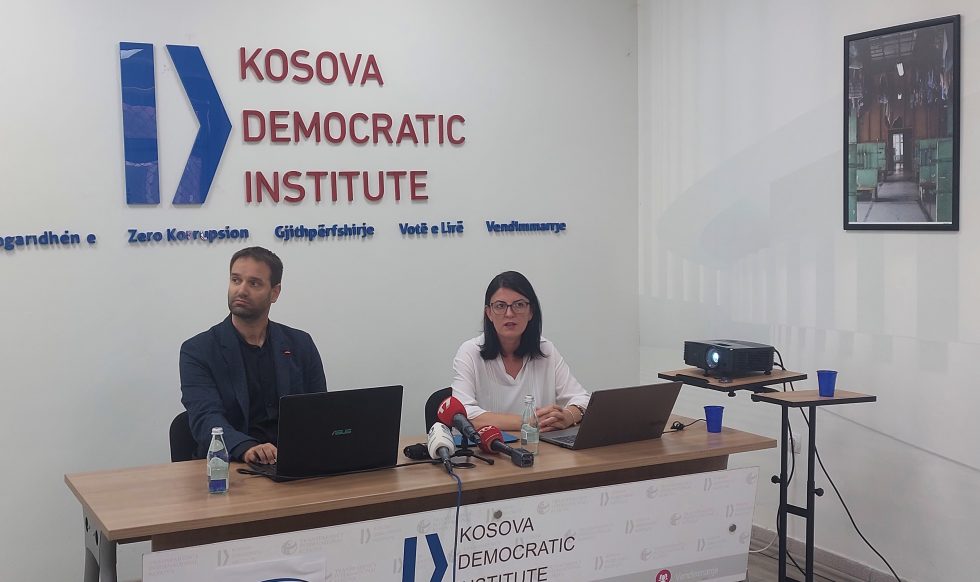 Today, Kosova Democratic Institute (KDI), with the financial support of SlovakAid – Official Development Assistance of the Slovak Republic, and cooperation with Transparency International Slovakia, launched the Transparency Index for Municipal Governance for 2021. The historic index with this measuring had been enriched with 46 new indicated and two new public policies, hence raising the number of indicators from 41 to 87 in eight six governance pillars such as 1) transparency of municipal authorities in public spending through public procurement, 2) budget transparency,  3) transparency in municipal grants and subsides, 4) citizen inclusion in municipal decision-making, 5) access to public documents, 6) municipal capacities to address corruption risks and conflict of interest, 7) property management and 8)public enterprises and organizations at the ownership of municipalities.

Diana Metushi-Krasniqi, project manager at KDI, during the presentation of the report stated that “in 2021, although with 112% increase to the measuring indicators, Kosovo municipalities achieved an overall transparency by 56% on the selected polities. Moreover, even though a year of local elections, unlike 2017 when due to elections the municipal transparency was neglected, 2021 index shows the transparency in local governance was increased when comparing the same indicators from the previous year. The year 2021 showed a positive trend in transparency in public procurement at the municipal level, marking an increase of about 13% compared to the same seven indicators within this governing policy from an average of 57% in 2020 to an average of 70% in 2021. An increase of 9% was also recorded in budget transparency in same seven indicators (from 64% in 2020 to 73% in 2021).

However, Ms. Metushi-Krasniqi added that the index highlights the need for local government engagement in increasing transparency regarding public enterprises and organizations, creating instruments to protect integrity and reporting unethical behaviour, as well as a greater commitment to public participation in governance planning and decision-making processes. Moreover, the fact that we have four municipalities with a minimum score below 10 points remains a concern, which consequently, in addition to not being accountable to their citizens, also have a negative impact on the policy summary results and the overall index score. Likewise, in the absence of the PRB board, four indicators related to the decisions of this institution could not be measured.

Also, hereby KDI will be launching the digital platform www.transparenca-komunale.org where the public and institutions can see the municipal performance in detail for each indicator.

Additionally, Mr. Michal Pisko added that Transparency International Slovakia has been active on a municipal level for over 20 years, including transparency rankings of the 100 largest cities and eight Slovak regions since 2010. These evaluations are particularly effective in providing feedback to the municipal representatives, as well as increasing public engagement. This competitive nature also motivates the municipalities to enhance openness and draw inspiration from best practices utilized by their neighbours.

Although the rankings are highly effective tools for improving transparency and public participation, they cannot measure corruption and clientelism themselves. Nevertheless, the level of accessibility of information is essential to exposing opaque practices and holding the municipal representatives accountable.

In Slovakia, transparency rankings have been linked to a significant improvement in public oversight. This positive impact led to the introduction of the project to other countries, such as Ukraine and Moldova, where it also proved to be effective. “Assuredly, the shared methodology shall contribute to openness and public engagement also in Kosovo municipalities,” said Michal Pisko, director of Transparency International Slovakia.

KDI encourages all municipalities to review their gaps in this index for 2021 and focus on increasing the transparency in all public policies in 2022.

The full report can be found here: TRANSPARENCY INDEX FOR MUNICIPAL GOVERNANCE 2021

**Transparency Index in Municipal Governance for 2021 was developed by Kosova Democtratic Institute (KDI) / Transparency International Kosova via a grant issued by SlovakAid – Official Development Assistance of the Slovak Republic.