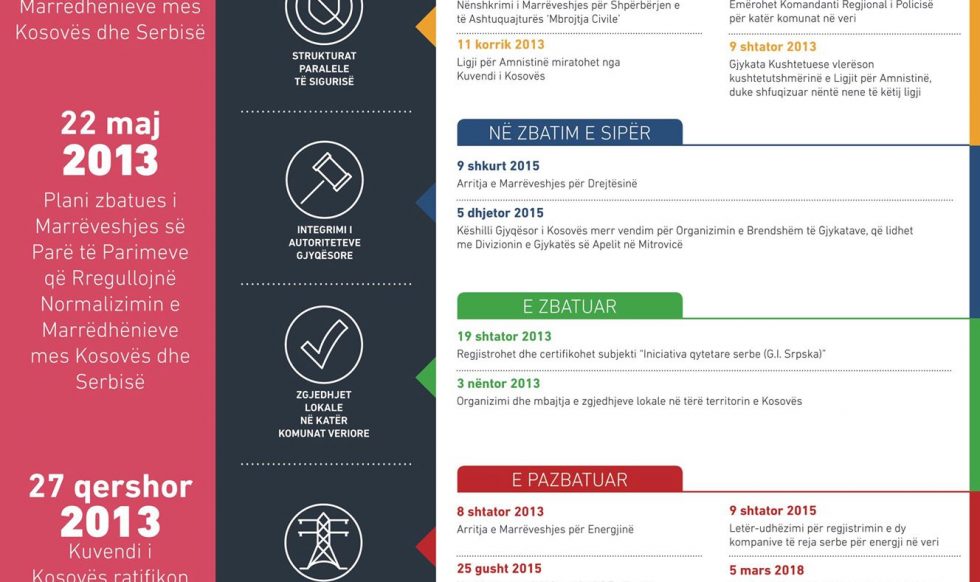 SIX YEARS AFTER THE AGREEMENT, KOSOVO AND SERBIA FAR FROM NORMALIZATION OF RELATIONS

Six years after the first agreement on normalization of relations between Kosovo and Serbia, Kosova Democratic Institute (KDI) estimates that the lack of full implementation of this agreement has failed to meet the expectations of citizens. This agreement, mediated by the European Union and signed by then Prime Minister of Kosovo, Hashim Thaci and Serbia’s Prime Minister Ivica Dacic, was ratified in the Kosovo Assembly on June 27, 2013 as an international agreement. This is the first and the only agreement ratified within the process of normalizing relations with Serbia. The same has not been ratified by the Serbian Parliament. Moreover, the Constitutional Court of Serbia described the Brussels Agreement as a political and non-legal issue, and therefore rejected the review of its constitutionality.

The “historic” agreement was an attempt by the EU to resolve the problems between the two states, while its 15 points aimed at regulating issues related to the Association / Association of Serb-majority Municipalities, the integration of security and justice structures, organizing local elections in the four northern municipalities of Kosovo, energy, telecommunications and relevant European paths.

Problems that have accompanied the implementation of the Agreement on Normalization of Relations, but also the majority of subsequent agreements, are:

3. Lack of political will – As a sensitive political process, the lack of political will accompanying the dialogue process can be assessed at two levels: at the internal and bilateral level. At the internal level, political and social developments within the two states affected the low level of implementation of the agreements. At the bilateral level between the two states, the political implications that derive from the implementation of the agreement, beyond the technical aspect, have affected the parties, especially Serbia, to hesitate to implement the agreements;

4. Lack of transparency – has accompanied the process of dialogue since its beginning. This has contributed to the reduction of civic credibility to the process, but also to the lack of institutional co-ordination and political support for the various topics discussed;

1. The final agreement should not be written in the spirit of ambiguity – therefore it should clearly define the preservation of Kosovo’s statehood, including issues related to territorial integrity, unitary constitutional functioning of Kosovo, as well as international representation of Kosovo;

2. Broad Political Consensus – The State Delegation, created to represent Kosovo at the concluding stage of the dialogue, has not found broad support among the political spectrum. Achieving broad political consensus around this stage is key before reaching an eventual agreement;

3. Transparent process – Kosovo institutions, including the negotiating team, should ensure transparency of the process, keeping the Assembly, civil society and citizens informed of all developments related to the dialogue process;

4. Guarantees for the implementation of the agreements – The European Union and the US should have the guarantor role of the eventual agreement between the parties;