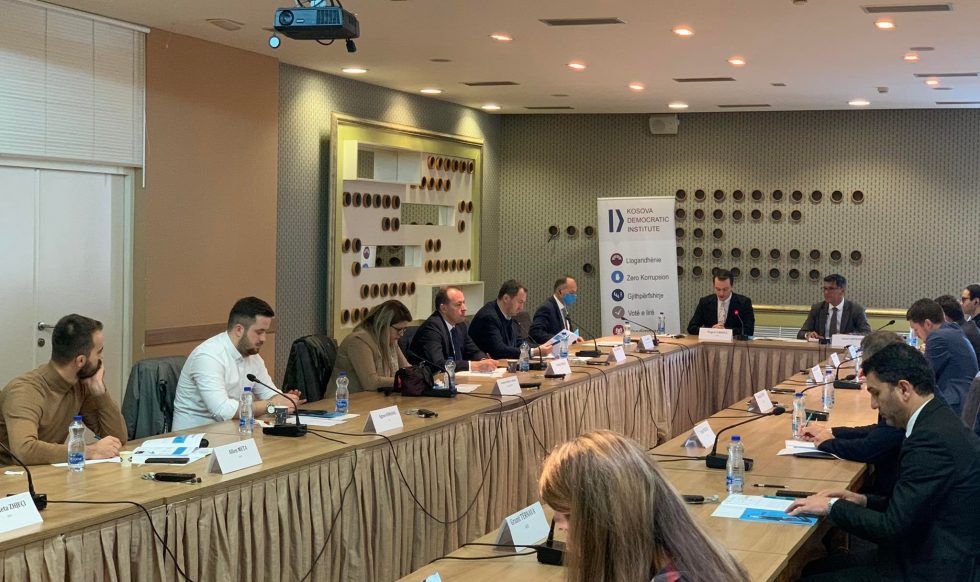 FROM KDI’S TABLE DISCUSSION: FINANCIAL REPORTING IS REQUIRED ALSO BY CANDIDATES FOR MAYOR

The Democratic Institute of Kosovo (KDI) organized today the table discussion “Financial transparency of candidates for mayors in the local elections 2021” in an open discussion with representatives of the CEC, IPRO, and Transparency International in the Czech Republic and civil society.

In the opening of this discussion, Ismet Kryeziu, Executive Director of KDI, said that despite the progress that Kosovo has made in many areas, corruption continues to be a challenge to combat for which there is lack of the will of institutions and political parties. He added that the management of finances by political parties promotes a transparent political system, and this is transferred to the values of institutions and government.

While, in his introductory speech, the Ambassador of the Czech Republic in Kosovo, Pavel Bílek, said that the support of Transparency International in the Czech Republic and the Czech government for KDI in the field of financing of political parties has been made for several years in order to help institutions of Kosovo to increase the financial transparency of political parties and candidates, and expressed readiness to share the experiences of their country to help Kosovo improve the legal framework in this regard.

KDI presented the report “Financial transparency of candidates for mayors in local elections 2021”. In his presentation, Eugen Cakolli, said that after the start of the official period of the election campaign, KDI has sent an electronic questionnaire to the candidates for mayor, of which only 51 have responded. Based on the statements of the candidates who responded positively to the questionnaire regarding the election campaign, funding and expenditures during it, it is noticed that there is a similar perception regarding the importance of financial transparency in relation to voters and the government itself.

Regarding the digital campaign, Cakolli pointed out that 88% of the candidates stated that “Facebook” is the official platform of communication between them and citizens during the campaign. It was emphasized that funding through their own budget is one of the main forms of campaign financing by candidates, to over 90% of candidates. While, within the support provided by the political entity, the coverage of transportation costs, provision of human resources, assistance in marketing services, as well as other forms of non-financial support, which include volunteers, free advertising space and free performances dominate. . In the context of the findings of this research, although the legislation does not provide for individual financial reporting of candidates, it was noted that 98% of mayoral candidates have stated that they are ‘pro’ that candidates be legally obliged to declare their campaign finances. .

In general, all panelists and participants of this roundtable agreed on the importance and need for the establishment of legal provisions governing the issue of financial transparency of candidates for mayors in the framework of the Law on Financing of Political Entities.