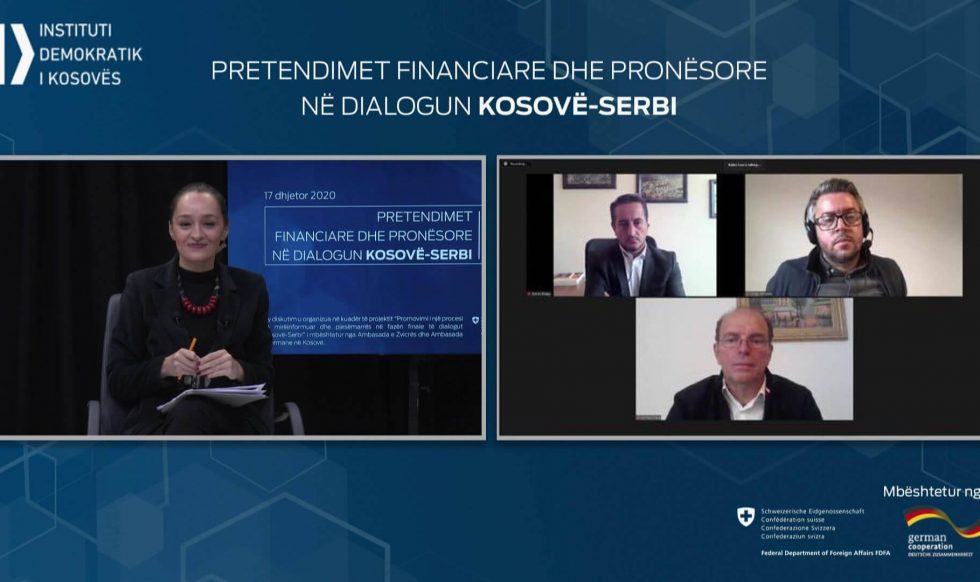 From KDI discussion: SERBIA’S FINANCIAL OBLIGATIONS TO KOSOVO ARE HUNDREDS OF BILLION

Kosovo Democratic Institute (KDI) has held today the online discussion “Financial and property claims in the Kosovo-Serbia dialogue”, which was attended by eminent experts of this field and representatives of civil society.

Ahmet Shala, former Minister of Finance, initially stressed that Kosovo as a state has shown a high level of seriousness by taking over all its part of the external debt of the former Yugoslavia, which have been approved by the legitimate bodies of Kosovo and from which its citizens have benefited. In this regard, he added that all debts incurred by Serbia on behalf of Kosovo after 1989 are not obligations of Kosovo, including the period during the administration of UNMIK, in this case Shala assessed that exactly with Regulation no. 1 of UNMIK stipulated that no borrowing shall be taken on behalf of Kosovo by Serbia.

Regarding Serbia’s financial obligations to Kosovo, according to Ahmet Shala, initially professional roundtables should be organized and define a clear methodology for calculating war damages. According to his calculations, in a division of 25 categories where damage was caused, Serbia’s liabilities are about $ 250 billion, not counting industrial and military damages. “Of these, less than 10% of the total debt that Serbia has to pay to Kosovo, are pensions,” Shala added. Also addressed was the issue of Kosovo-owned socially-owned properties and socially-owned enterprises in Serbia, for which it was said that Serbia did not cooperate, and even attempted to privatize Kosovo’s assets or deter foreign investors. He added that the Ahtisaari Package has also addressed the issue of ownership of public and socially-owned enterprises operating in the territory of Kosovo and their management is also in Kosovo, considering it Kosovo property.

Regarding pensions, Artan Mustafa, social policy lecturer, assessed that as a topic is debatable about which a “myth” has been created with the situation after the Kosovo Pension Fund was taken by Serbia in 1992. “At that time, the Fund already was in deficit, not being able to pay the existing pension obligations,” he added. Mustafa also estimated that, based on the then ‘pay as you go’ system where the current workers paid for the current pensioners, it falls to the current generation to owe the workers of that time. He added that this issue should be reviewed carefully. It was also requested that in the framework of the dialogue, the issue of pensions must be addressed, in order to unify the entire pension system of Kosovo, knowing that in Kosovo there are still two parallel systems operating in this field. In this regard, the lack of official reports drafted by Kosovo institutions on the issue of pensions was emphasized.

The lack of research or official reports from Kosovo institutions was also highlighted in terms of war victims and reparations. Bekim Blakaj, director of the Humanitarian Fund for Human Rights, stated that this organization is in the process of documenting all those killed and missing in the period January

1, 1998 – December 31, 2000. So far, he said that 13,535 persons have been identified who are killed or missing during this period in Kosovo, the vast majority of whom are civilians. For the same, but also for other detainees or persons who have been subjected to inhuman treatment, Kosovo should include it in the final agreement with Serbia for their compensation, based on numerous evidences and judgments of international institutions including the Hague Tribunal for the former Yugoslavia that have documented the responsibility of the heads of the state of Serbia. Blakaj added that it is the right action for the Kosovar side to address the issue of reparations of war victims at the dialogue table, recognizing that also the families of non-Albanian victims have their right to compensation. “For all crimes committed in Kosovo, only 65 people have been convicted before the courts, including those in Serbia, Kosovo or international courts. Therefore, there is no justice for the victims. “Apology is important, as part of reparations.” he declared.

All participants called for greater cooperation between Kosovo institutions and local experts, but also international ones, in order to contribute to improving Kosovo’s position in relation to the final phase of the dialogue with Serbia.

The discussion was organized within the project “Promotion of a well-informed process and participatory in the final phase of the Kosovo-Serbia dialogue” supported by the Swiss Embassy and the German Embassy in Kosovo. This discussion took place in full compliance with the measures of the relevant institutions for preventing and combating the pandemic. You can follow the full discussion here.