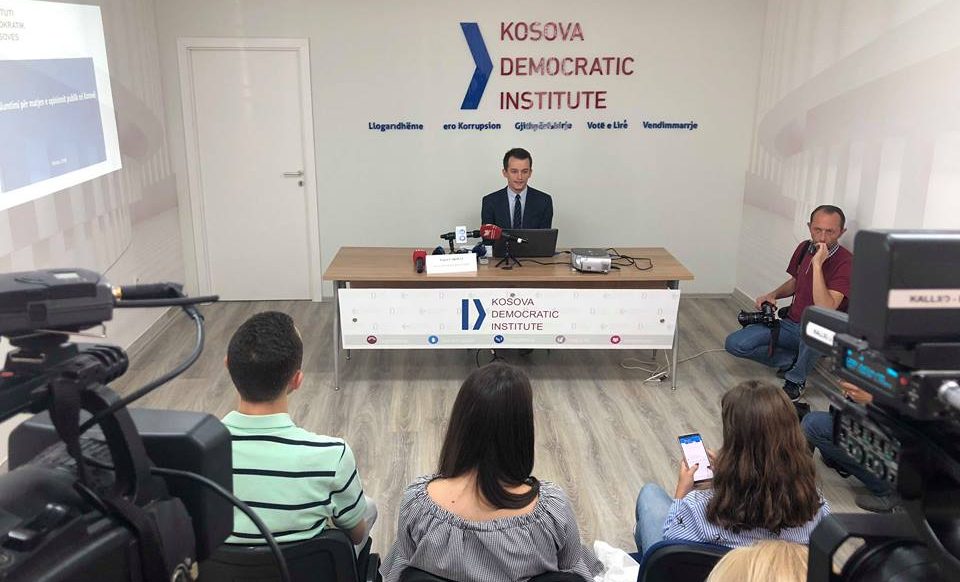 KDI’s survey: A year after, the citizens dissatisfied with the work of the executive and the legislative

In a media conference held today, Kosovo Democratic Institute (KDI) representatives presented the key findings of the public opinion research regarding the current political situation, satisfaction with the work of public institutions, and political preferences of the citizens for the upcoming elections.

Eugen Cakolli from KDI has emphasized the fact that 74 per cent of the respondents think that things in Kosovo are going in the wrong direction. “Moreover, when citizens were specifically asked about their satisfaction with the work of the Government of Kosovo, 72 per cent of them expressed their dissatisfaction with its work of the executive branch, while only 26 per cent are satisfied,” said Mr. Cakolli. Based on the survey’s results, unemployment remains the main problem faced by most of the citizens of Kosovo, identified as the main problem by 61.3 per cent of the respondents of this study. Following the unemployment problem, issues such as visa liberalization (42.8 per cent), lack of the rule of law (33.3 per cent), poor situation in the public healthcare sector (28.9 per cent), and the lack of quality education (19.6 per cent), are listed as the main problems that the citizens of Kosovo have personally faced during the last six months.

Traffic safety is a new problem evidenced by citizens, but that has not been a concern at this level before. About 13 per cent of the citizens have faced this problem in the last six months.

53.5 per cent of the citizens assessed Kosovo Members of Parliament as not at all accountable to their voters, after winning the office. “Only 19.1 per cent of the respondents have declared that they had the opportunity to communicate with any of the MPs since the last parliamentary elections”, Cakolli has added.

He said that respondents were also asked about their participation in parliamentary elections if the latter were to be held this Sunday. “More than 70 per cent of them confirmed that they would participate in the elections, around 20 per cent would not take part, whilst the rest of the respondents were not determined or refused to answer on whether they would go out and vote on election day”, he stressed.

Cakolli noted the fact that 15.6 per cent of the respondents have refused to declare which subject they would vote for.

Finally, respondents who declared which political party they would vote for in the upcoming elections were also asked about the most likely and unlikely coalitions between the party they declared that they would vote, and the other parties.

The overall trends of these results show that most of the parties’ electorate in Kosovo, prefer their parties to solely compete in the elections.

Divided by political party, these are the preferences of voters with regard to the possible coalitions, presented in cumulative percentage:

New Kosovo Alliance and the Alternative, which have a smaller percentage of voters, are generally the most preferred parties to be in a coalition with, for most of the other parties voters. But due to the small percentage of voters who were declared to vote for them if elections were to be held this Sunday, these subjects are not included in this chart.

The full presentation of the findings can be downloaded here.

*This research was conducted within the “Free and fair elections Program”, respectively the project “Every vote counts!”.

The research was carried out with the support of the Democratic Society Promotion (DSP) – funded by the Swiss Agency for Development and Cooperation (SDC) and the Danish Ministry for Foreign Affairs (DANIDA) and managed by the Kosovar Civil Society Foundation (KCSF).

The content of this research is the responsibility of KDI and can in no way be considered as a standpoint of SDC, DANIDA or KCSF.