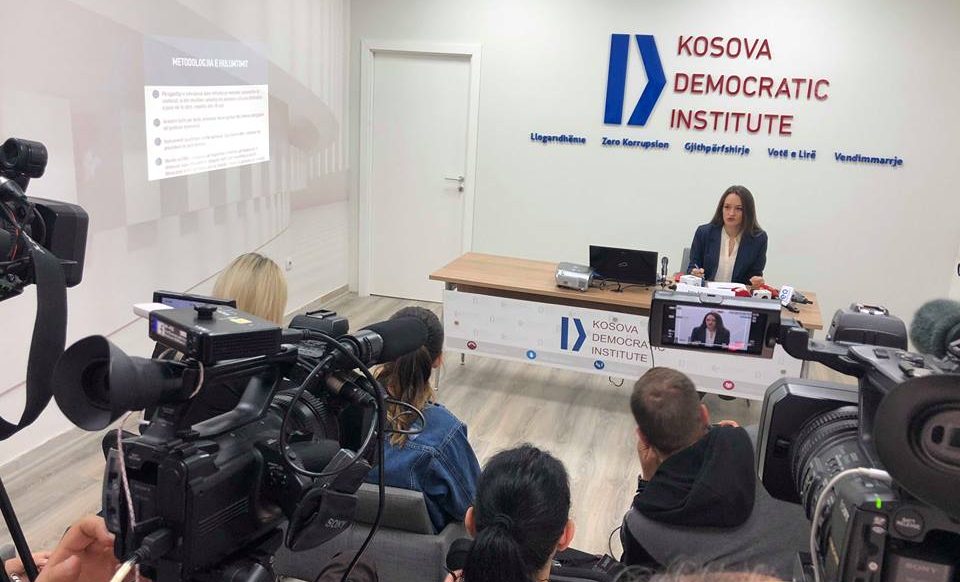 KDI SURVEY: 77.6% OF CITIZENS OPPOSE THE IDEA OF THE TERRITORY EXCHANGE BETWEEN KOSOVO AND SERBIA

Kosova Democratic Institute (KDI) held today a press conference on the results of the seventh public opinion poll regarding the Kosovo-Serbia dialogue process. The survey period was 05 – 13 September 2018. Jeta Krasniqi from KDI during the presentation of the data reported that the questions of this survey are related to the latest developments regarding the Kosovo-Serbia dialogue process, about the role of the President and the opposition around the option of borders exchange between the parties as part of an eventual agreement and their actions and the most acceptable option of citizens between an association of Serb majority municipalities with executive powers and changing Kosovo’s borders.

“Considering the options currently discussed as possible alternatives for an eventual agreement between the parties. On the question of which of the two possible alternatives the citizens would accept respectively the change of the borders of Kosovo or the association of Serb majority municipalities with executive competence. The vast majority of respondents, respectively 82.9%, expressed that they would not accept any alternative, while 10.5% would prefer more border changes than associations of Serb-majority municipalities for which 6.6% of citizens expressed support said Krasniqi. She added that it is worth pointing out that the most preferred option for Serb community respondents is the  majority Serb community association with 57%, while for the Albanian community and others change of borders as a preference after option either.

Regarding the question of what action citizens would take if the presidents Thaci-Vucic reach an agreement on exchange of territories between Kosovo and Serbia on an ethnic basis, the results reveal that 51.5% of the citizens would protest against this agreement. There are 20% of the citizens who said they would seek a referendum and 9% would agree with this agreement. Krasniqi said that in the question about the citizens’ satisfaction with the role that opposition parties are playing in the Kosovo- Serbia dialogue, 65.6% of respondents expressed dissatisfaction with only 29% who said they are satisfied with the role that opposition parties are playing in this process.
The results can be downloaded here.

This public opinion poll is conducted within the framework of the project, “European Perspective – Building a National Consensus on the Normalization of Relations with Serbia”, supported by the Swiss Embassy in Pristina.