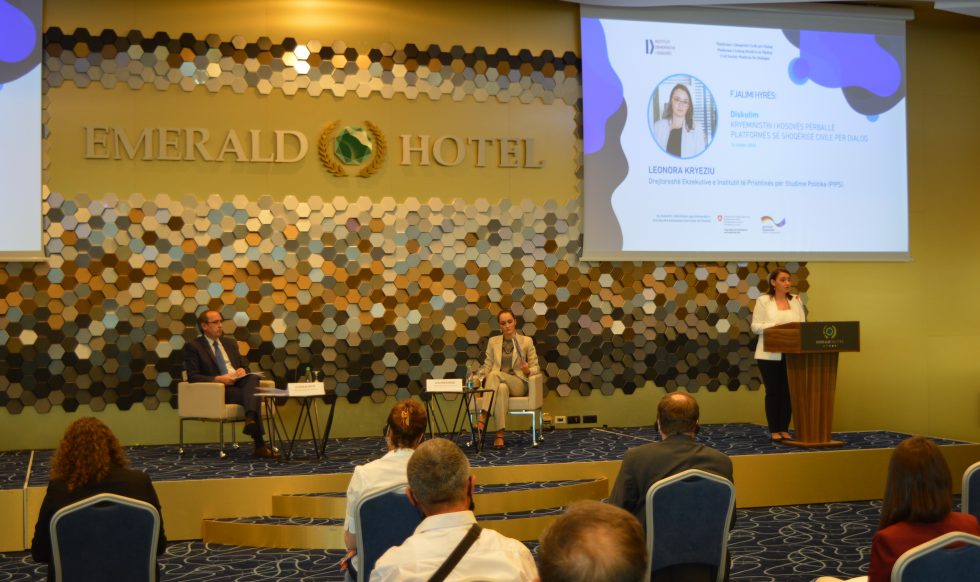 Prime Minister Hoti: there is no agreement without mutual recognition

The Kosova Democratic Institute (KDI) within the “Civil Society Platform for Dialogue” has held a discussion with the Prime Minister of Kosovo, Mr. Avdullah Hoti and representatives of civil society and the media.

At the opening of the roundtable, Jeta Krasniqi, KDI project manager, made a summary of recent developments regarding the process of normalization of relations, emphasizing that there are still many doubts about it. She added that the lack of political consensus in the country continues to accompany the dialogue process with Serbia, while the lack of transparency remains problematic which needs to be addressed. She also raised the issue of the implementation of the Washington agreement as well as the EU-mediated process.

Leonora Kryeziu, Executive Director of PIPS, introduced the “Civil Society Platform for Dialogue” where she stressed that this platform came as a need to update the resumed dialogue process, bringing the citizen closer to developments in dialogue. She added that the platform is established as a joint initiative of organizations and members of civil society of different profiles, including the ethnic aspect. The aim is, among other things, to promote transparency, inclusiveness and accountability of the institutions responsible for the Kosovo-Serbia dialogue process. Kryeziu said that “differences in democracy can be fruitful, but not permanent antagonisms” urging the Prime Minister to use the opportunities and expertise that this platform provides.

In his addressing, the Prime Minister of Kosovo, Avdullah Hoti, introduced the principles and objectives of the Government regarding the dialogue process with Serbia. Regarding the Washington agreement, he pointed out the steps towards reaching the Washington agreement. He announced that the Government has begun preparations for the implementation of the Washington agreement and plans for the obligations of the relevant Ministries for the implementation of this agreement will be prepared in the coming days. Regarding the meetings in Brussels, the Prime Minister stated that so far the topic of missing persons, economic development, the topic of displaced persons, property issues and the association of Serb-majority municipalities have been discussed. He stressed that he expects a final agreement with Serbia to be concluded within months or a year. “What we are doing is discussing the elements of the final agreement, in accordance with the international conventions. We are not reaching a partial agreement but a final agreement for mutual recognition.” – stressed Prime Minister Hoti.

According to him, the purpose of this process is only mutual recognition and they will agree on all issues with Serbia or there will be no agreement at all. He pledged that the agreement of the Association of Serb-majority municipalities will not be reopened, while its implementation will take place only after mutual recognition and only in accordance with the Constitution. Prime Minister Hoti added that the negotiation methodology is built in such a format that each party proposes topics and discussions, adding that the issue of financial obligations between the two countries, the issue of pensions, the succession of the former Yugoslavia’s wealth, the former Yugoslavia’s public debt, war damages and several other issues within this category will be discussed at the next meeting in Brussels.

Participants from civil society at this roundtable raised the issue of transparency in dialogue, the opening of the Kosovo Embassy in Jerusalem, the Association of Serb Majority Municipalities, Ujman, the Orthodox Church, mini-Schengen, and Kosovo’s strategy in case of failure of a final agreement with Serbia. Prime Minister Hoti pledged full transparency to the Assembly, civil society and the general public and publicly invited the civil society organizations to become part of the Government’s expert teams on the issue of dialogue.

This discussion is organized within the project “Promotion of a well-informed and participatory process in the final phase of the Kosovo-Serbia dialogue” supported by the Embassy of Switzerland and the German Embassy in Kosovo.