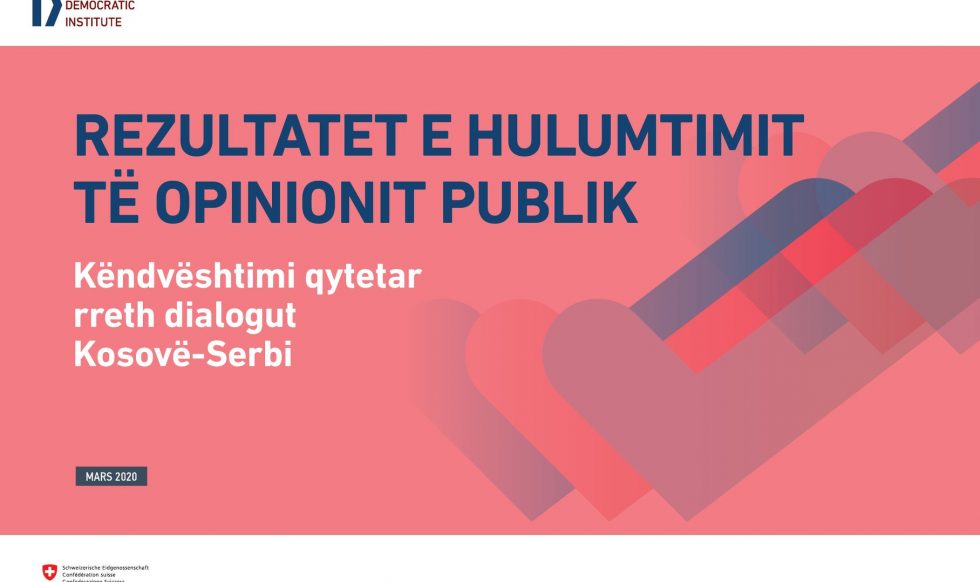 KDI Opinion Poll: Citizens estimate the dialogue agreement will be determined by US and EU

The Kosovo-Serbia dialogue process has been mediated by the EU since 2011, under which a series of agreements have been reached that have not been fully implemented, while relations between Kosovo and Serbia have failed to normalize. When asked what the EU should do to restore its credibility as facilitator of the Kosovo-Serbia dialogue process, 66% of citiznes estimated that visa liberalization for Kosovo’s citizens would affect the restoration of that confidence. According to ethnicity, this opinion is shared by 67% of respondents from the Albanian community, 57% of respondents from other non-majority communities and 30% of respondents from the Serb community.

On the other hand, 35% of citizens believe that in order to restore credibility, EU member states should have a unique attitude towards Kosovo, while 33% of them believe that the EU should punish the party that fails to implement the agreements reached, as a way to enhance its credibility as a mediator of the dialogue process. By ethnicity, 66% of Serb community respondents believe that the EU must maintain a neutral stance on Kosovo-Serbia relations to restore its credibility as a mediator. This attitude is supported by 22% of the respondents from the Albanian community and 26% from other communities.

KDI has assessed to highlight the civic perspective on the Kosovo-Serbia dialogue after the formation of the new Government.

This public opinion survey was conducted in the period 13 – 20 March 2020, with a representative sample of 1070 respondents nationwide from all communities living in Kosovo. Error margin ± 3% in selection for 95% confidence interval. The survey was conducted through CATI technique (made through telephone interviews and data processed through survey management software).

This public opinion survey was conducted in the framework of the project “European Perspective – Building National Consensus for Normalizing Relations with Serbia” supported by the Swiss Embassy in Pristina.