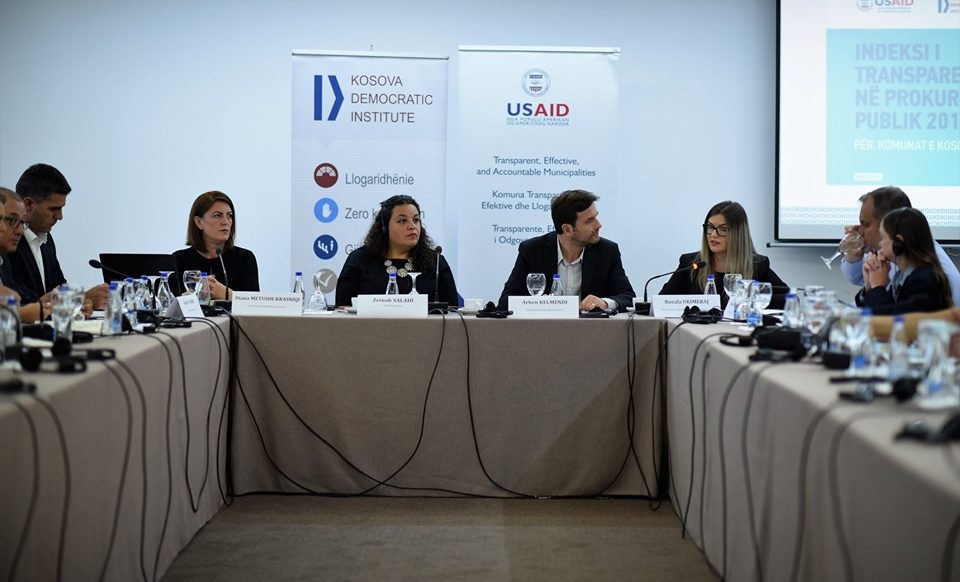 Today, the USAID Deputy Mission Director Zeinah Salahi together with the Kosova Democratic Institute (KDI) launched the Transparency Index in Public Procurement. The Index shows significant progress in the transparency of public procurement at municipal level. While amendments to secondary legislation contributed to transparency in e-Procurement, the political willingness at the local level marked 2018 as the year when important documents such as contracts, decisions on the first instance claims, regulations for grant awards and information on the evaluation process for these grants started to be published on the municipalities’ websites.

Diana Metushi-Krasniqi, Project Manager at KDI, presented the main findings of the report by stating that “This year we have a 28% increase in transparency compared to the previous year, nonetheless the average performance is only 58%. Municipalities should continue their efforts to achieve maximum transparency in the 43 measured indicators.” Mrs. Metushi-Krasniqi also added that “This index also reflects that municipalities, in addition to improving transparency, should focus on establishing and implementing mechanisms to increase accountability.”

The event brought together key actors from Kosovo’s government and civil society organizations. During the event, the USAID’s Deputy Mission Director Ms. Salahi noted that “Transparent procurement is a critical part in increasing accountability and fighting corruption in any country for any government. In Kosovo this reform is highly important as half of the country’s budget is spent through public procurement in either national or municipal level.” While the Secretary General of MLGA, said “Monitoring municipal transparency by the nongovernmental sector represents a strong impetus for public institutions to implement the best standards of public administration, in favor of creating what is known as open and transparent governance, by building efficient legal mechanisms legal so that citizens can be as close as possible to the base of information” and Arben Kelmendi, Program Coordinator of KDI, said “The Kosovo Democratic Institute continues the tradition of publishing the Index, which started in 2014, because KDI believes that a municipal government that makes information easily accessible to the public encourages active citizenry and in turn helps local institutions build inclusive and well informed decision-making process.”

During the event, the mayors of the two most successful municipalities addressed the participants. The Mayor of Prishtina, Mr. Shpend Ahmeti said that “We will publish all documents as per the law within 15 days to provide citizens with complete information. This does not mean that we have no mistakes, and that MLGA and PRB have not returned back our decisions. The way forward for Kosovo is full transparency in every decision. Good governance should not be at the mercy of politicians, but functional systems need to be built.” To add the Mayor of Vushtrri, Mr. Xhafer Tahiri noted that he “is very pleased that for less than two years of leadership we have achieved this improvement. Our priority has been to set an example of good practice as a municipality. We are the first municipality to adopt the code of ethics and integrity plan. The code of ethics statement is signed by each official and is in their files. We have published all the beneficiaries of the subsidies both on the website and on social networks. We have also included civil society in our city, even though it is not as organized as in the capital city.”

The Transparency Index in Public Procurement was developed by KDI and supported by USAID Transparent, Effective and Accountable Municipalities activity in Kosovo.

USAID has established the five-year Transparent, Effective and Accountable Municipalities activity in Kosovo to support the Government of Kosovo (GoK) to implement anti-corruption reforms and improve the transparency and accountability of the municipal procurement process in all 38 Kosovo municipalities. The project is supporting eligible CSOs to create, implement and promote innovative ideas, mechanisms and solutions that will contribute to increasing the role of citizens and civil society organizations to reduce municipal governments’ vulnerability to corruption, promoting a fair and transparent procurement system, and implementing monitoring activities that improve government service delivery.