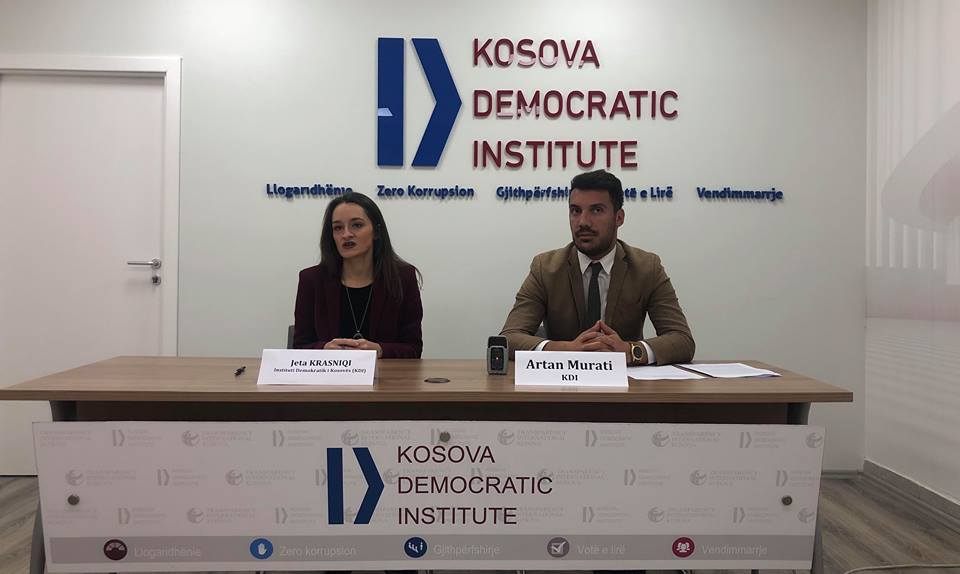 Kosovo Democratic Institute (KDI), held today a press conference about the functioning of the work of the Assembly of the Republic of Kosovo.

On this occasion, Artan Murati from KDI stated that more than a year since the constitution of the sixth legislature, the Assembly has failed to function properly and has constantly faced different crises, mainly of political nature.

The parliamentary majority’s absences are one of the main problems of this legislature, a trend which is continuing in the autumn session.

Murati emphasized that the KDI invites the Assembly Presidency to hold regular meetings and convene sessions at more frequent intervals, preventing the gathering of many agenda items as this is directly affecting the non-fulfillment of the legislative agenda.

Regarding the role of the opposition, he underlined that so far, the opposition parliamentary groups did not have a common strategy either for boycotting the work of the Assembly or for new elections. “This uncoordinated approach has been unproductive and has failed to bring the expected results to the opposition. Although opposition entities are not obliged to make the numbers to the entities in power, however, constructiveness for the general good is necessary, “Murati added.

He among other things said that consensus among political subjects is crucial in this period, and that debate should not be shifted to other forums outside the Kosovo Assembly.

While Jeta Krasniqi from KDI spoke about the Kosovo-Serbia dialogue as one of the issues that is affecting the blockade of the work of the Assembly and the boycott of the works of the plenary sessions by the opposition.

She has estimated that the beginning of the new phase of the Kosovo – Serbia dialogue has caused polarization among the political parties in Kosovo about expectations from this process, topics to be discussed and who should lead the dialogue process.

Considering the importance of this topic, Krasniqi emphasized that the KDI considers that the debate about the Kosovo-Serbia dialogue should take place in the Assembly of the Republic of Kosovo where state platforms should be drafted on this process. The Assembly should be pro active in this process should define the red lines of dialogue as the highest decision-making institution, this institution should not be overlooked.

At the same time she said that the Assembly of the Republic of Kosovo should ask the Government of Kosovo what is happening in the process of technical dialogue, who is leading this process, considering that the chief negotiator appointed by the Prime Minister is waiting for the nomination for the ambassador to the United Arab Emirates (UAE).