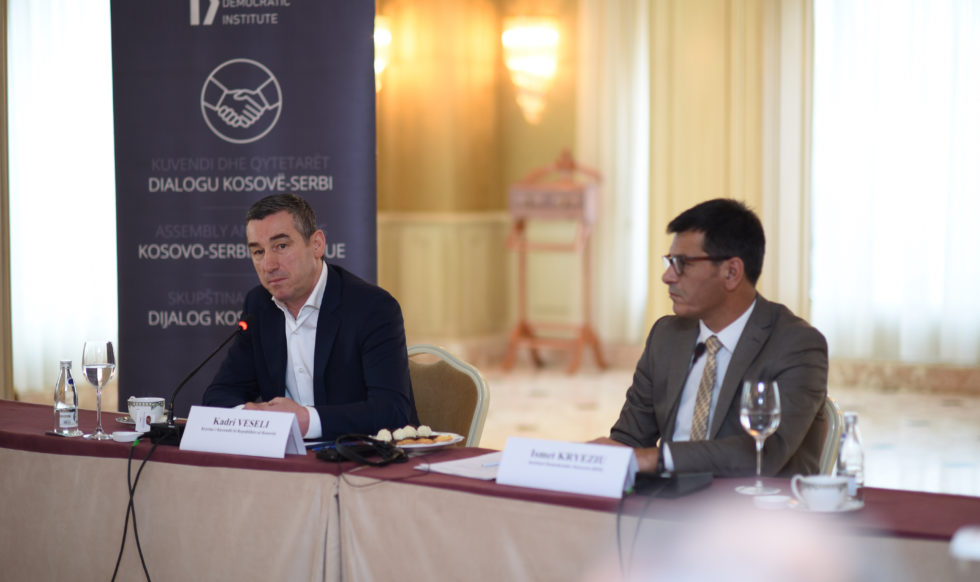 KDI: VESELI WARNES THAT FROM JANUARY WILL INITIATE DISCUSSIONS WITH ALL POLITICAL SPECTRUM RELATING TO THE NEW PHASES OF DIALOGUE

Kosovo Democratic Institute (KDI), held today a round table discussion with the President of the Assembly of the Republic of Kosovo, Kadri Veseli, representatives of political parties, civil society, ambassadors and media, during which was discussed the role that the Assembly of the Republic of Kosovo should have in the new phase of the Kosovo-Serbia dialogue. At the opening of this discussion, KDI’s executive director, Ismet Kryeziu, made an overall assessment of the dialogue process. Kryeziu emphasized that this process was unclear and that there was lack of coordination and consensus of the entire political spectrum for this process. In connection with the new phase of the dialogue emphasized that the Assembly should speak its word through a resolution for defining the dialogue team, the format and timelines of this process.

Speaker of the Parliament Veseli stressed that the dialogue that has been developed with Serbia has been indispensable because it has been the best way to neutralize parallel structures, but internal unity as a result of lack of internal dialogue has been an obstacle to achieving results in this process. Further on, Veseli added that dialogue with Serbia is without alternative but in the new phase there should be comprehensiveness and consensus regarding the format, themes and agenda of the Republic of Kosovo. The President of the Assembly Veseli also assessed that dialogue is the only means through which we can solve open issues with our neighbours and that any state, whatever it is, should not interfere in the domestic relations of the Republic of Kosovo. In this context, Veseli underlined that Serbia should not manipulate with Kosovo Serbs because they have all the constitutional rights that provide them with a decent life.

Regarding the role that the Assembly has and should have in this process, Veseli expressed his dissatisfaction with the transparency that characterized the process of dialogue until this stage, and requested that in the next stage the Assembly be well informed and access to information and agreements should be made easier. In questions on whether the Assembly should support the President of the Republic of Kosovo, who is expected to direct the final stage of the dialogue and whether there should be a more wide negotiation along with a negotiating platform, President Veseli said that along with the President and Prime Minister of the Republic of Kosovo are working in this direction to create a platform for the new phase of talks, which will guarantee the full political spectrum, but also civil society and academia.

Veseli added that he would personally undertake an initiative as of January next year to gather all parliamentary parties, positions and opposition in order to reach agreement and to establish a consensus about the process of dialogue before the start of the phase.