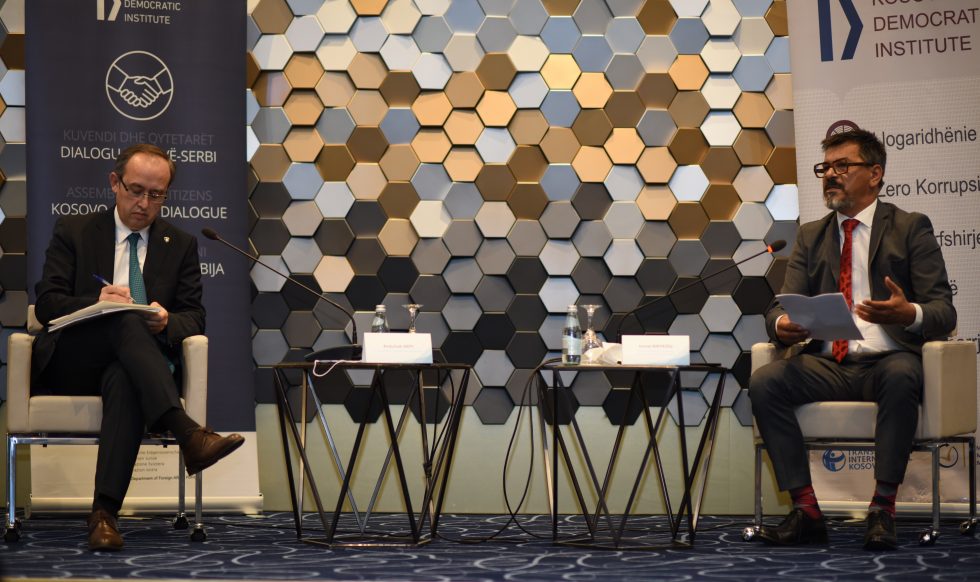 From the KDI roundtable – Hoti: There are no other compromises, Kosovo goes into dialogue only for recognition

Kosova Democratic Institute (KDI) held a roundtable discussion today “What is the platform of the Government of Kosovo in the dialogue with Serbia?” between Prime Minister Hoti and representatives of civil society and the media.

At the opening of the roundtable, Ismet Kryeziu, Executive Director of KDI, stressed that the dialogue process has indirectly affected political developments. Kryeziu added that since the dialogue is already about consolidating citizenship, both internally and externally, political consensus is needed.

The Swiss Ambassador to Pristina, Jean Hubert-Lebet, in his welcoming speech, stressed that the process of normalization between Kosovo and Serbia is a European issue. According to him, “everyone should understand that European problems require European solutions. […] Only solutions that respect European values can lead to European integration. ”

In his speech, the Prime Minister of Kosovo, Avdullah Hoti, listed the principles and objectives of the Platform of the Government of Kosovo regarding the dialogue process. Regarding the announced meeting for June 27 in Washington, the Prime Minister stated that there is still no set agenda or topics, and said that after their clarification, the delegation that will attend the meeting will be appointed. Furthermore, he announced that the Government has decided to suspend the actions related to Kosovo’s membership in international organizations until this meeting is held, showing the goodwill of the Kosovar side. “After the end of this meeting, the Paris Summit is expected to be held in July,” he announced.

Regarding the role of the United States and the European Union in the current dialogue process, Hoti stated that “Both sides complement each other”. According to him, the agreement cannot be reached, much less implemented, without the involvement of both parties.

The participants from the civil society present at this roundtable raised the issues of forming the Association of Serb-Majority Municipalities, the involvement of the Serbian community in the dialogue process, the gender perspective in the dialogue, and the repeal of UN Security Council Resolution 1244.

This discussion was organized with the support of the Swiss Embassy in Pristina.