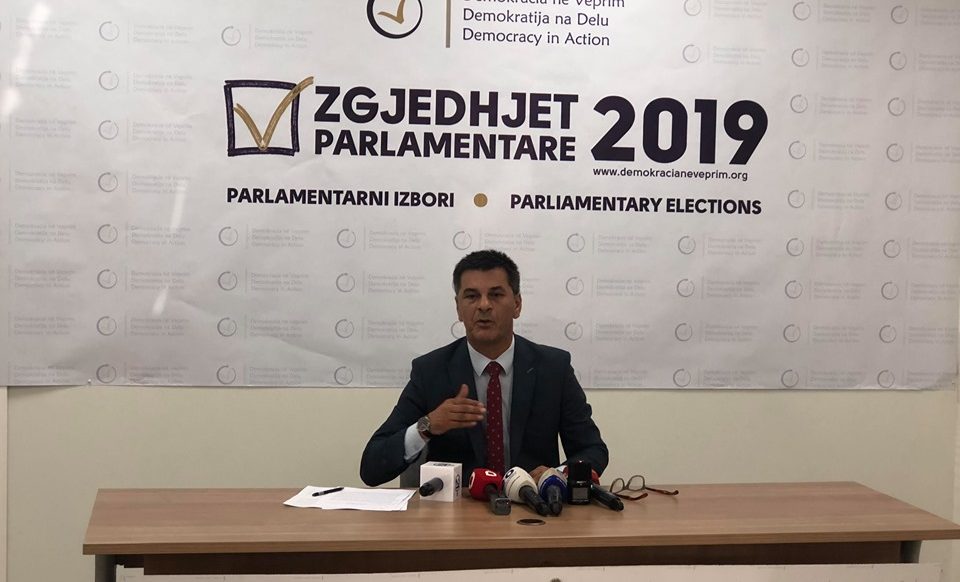 NGO Coalition for Election Observation &quot;Democracy in Action (DiA)&quot; has begun
preparations for monitoring the electoral process for snap parliamentary
elections for the Kosovo Assembly. DiA will also closely monitor the activities of
the Central Election Commission (CEC), confirming its commitment to ensuring
proper organization and management of the electoral process.
The first issue that requires immediate attention from political entities is the
nomination of members of the Municipal Election Commissions (MECs), applying
the principle of gender equality. Data from the lat parliamentary elections show
that political parties nominated only 25 women (or about 9%) out of 263 MEC
members, in over 40% of municipalities there were no women in the MECs while
only four (4) of the 38 MECs had a women as chairperson.
DiA reminds political entities that their promises to include women in the
electoral process can only be achieved through concrete action, guaranteeing
equal gender representation in the nomination of MEC members, a process that
has started today and ends August 31, based on the constitutional provisions and
the Law on Gender Equality. In addition, in 2015, political parties the country
signed the Declaration for Increasing the Involvement of Women in Electoral
Processes, which aimed to increase the representation of women of at least 40%
in election management bodies at the central, municipal and polling station level
and until equitable representation is reached for both genders.
An important deadline in the process of organizing elections is the final date for
certification of political entities and their candidates. During this period, political

entities have the opportunity to finally guarantee the implementation of the Law
on Gender Equality by applying 50% gender quotas to their candidate lists and to
conform to the basic principles of a democratic society. Equal participation of
women in politics is one of the key elements of democracy that enables economic
and societal development. The gender quota of 30% for candidate lists has
resulted in greater representation of women without the need for gender quotas.
Namely, in the Fifth Legislature, 20 out of the 39 women MPs did not need a
quota to take office. In the Sixth Legislature 17 out of 38 MPs gained their seats
due to the quota, while 21 of them through directly through citizen’s vote. In the
last legislature, 7 of the 14 parliamentary committees were chaired by women
members. Thus, guaranteeing gender equality in the candidate lists, in addition to
ensuring respect of fundamental rights, contributes to better and democratic
governance.
CEC has also defined the period of voter service and the period of opposition and
confirmation of the voter list, which will begin on September 3 and end on
September 14, respectively, from September 12 to 14. These deadlines allow
citizens to identify deceased family members who continue to appear on the
voter list and report them to the respective institutions. DiA calls on all citizens to
make use of this timeframe because it would affect the cleaning of voter lists and
the prevention of possible abuse.
Expression of free citizen’s will in the electoral process should be a primary goal of
the CEC and political entities. Therefore, DiA requests from the CEC and political
entities to give a particular importance and focus on voter information and
education, given the large number of invalid ballots in past election cycles, which
was largely due to inadequate voter education campaigns. In the 2017
parliamentary elections, over 70,000 invalid ballots were identified, of which in
only 48.26% of the cases the candidates were marked but the political entity was
not, indicating lack of adequate information on the manner of voting, as well as
problems with ballot design. In this regard, we ask the CEC to consider the
recommendations of civil society organizations regarding the improvement of
voter information and education campaigns, and to use the design of the ballot
paper proposed by civil society, prepared by experts of the field, it has been

publicly tested, and it has been presented to the CEC, together with the test
results, since last year.
DiA will continue to closely monitor all processes related to the organization and
management of elections, calling on all actors involved in the process to ensure
the proper organization of elections in accordance wiht democratic standards and
applicable laws.